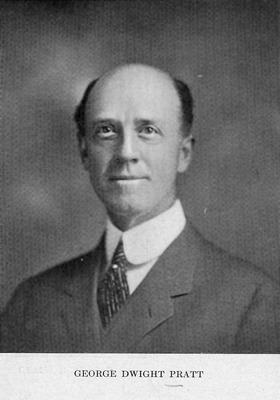 George Dwight Pratt (1864–1947) had a distinguished career in public service. He was a fifth-generation resident of Springfield in a family descended from John Pratt, who had emigrated from England to Cambridge, Massachusetts, in 1633. Pratt served on the board of directors for the following: Third National Bank of Springfield, the Holyoke Water Power Company, and the New York, New Haven & Hartford Railroad Company. For 10 years, he also served as president of the board of trustees for Springfield Hospital as it grew from serving 400 patients per year to nearly 3,000. During Pratt’s administration of the hospital, he contributed $5,000 in memory of his mother, Lucinda Orne Howard, a previous hospital trustee who had been instrumental in establishing the Springfield Hospital Training School for Nurses. The Pratt Building became the first separate location for the nursing school. Pratt also developed the plan for a memorial to Dr. Frederick Wilcox Chapin, Springfield's leading physician at the time, and personally raised $75,000 for the project.