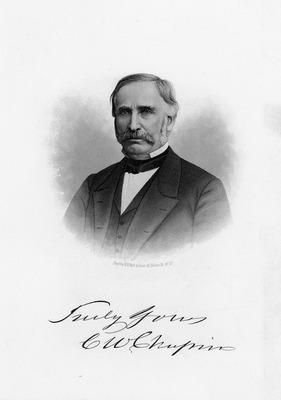 Chester William Chapin (1798-1883) was a descendant of Deacon Samuel Chapin, pilgrim immigrant and prominent early settler of Springfield,MA. Chester Chapin invested in stagecoach lines between Hartford, CT and Brattleboro, VT. When steamboats first began to service the CT River between Hartford and Springfield, he bought those, later expanding service to New Haven, CT and New York City. Chapin was a founder of the Western Railroad, a predecessor of the Boston & Albany Railroad, which eventually became part of the New York Central Railroad. Chapin served as a Democrat in the 44th Congress (1875-1877) and died in 1883. His widow, Dorcas Chapin, died in 1886 and bequeathed $25,000 on condition that a like sum be raised by subscription to support Springfield Hospital.