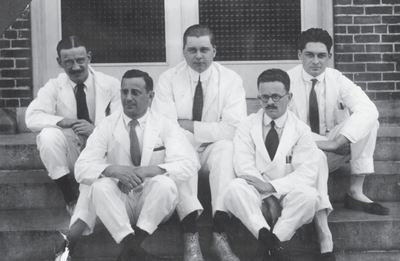 The American Medical Association began granting formal approval of hospital training programs in 1914, when Springfield Hospital was accepted, although intern training dated back to at least 1892. This undated photograph shows, from left to right, house physicians Whitcomb, Wright, Chapin, Rodding, and Feigl on the steps of the Chapin Memorial Building, constructed in 1915. By 1932, the Springfield Hospital internship included rotations at the City Home, Shriner’s Children’s Hospital, and the Health Department Hospital. There are numerous Springfield physicians named Chapin, beginning with Edward Chapin in the 1700s, then Charles Chapin in the early 1800s, and the previously mentioned F.W. Chapin, for whom the Chapin Building (now Wind) is named.